Dear grandchildren,
Despite multiple requests, we still have not received your Christmas lists.
It's so stressful trying to get you a gift you'll love when we only see you
once a year. So we wrote a song about it: 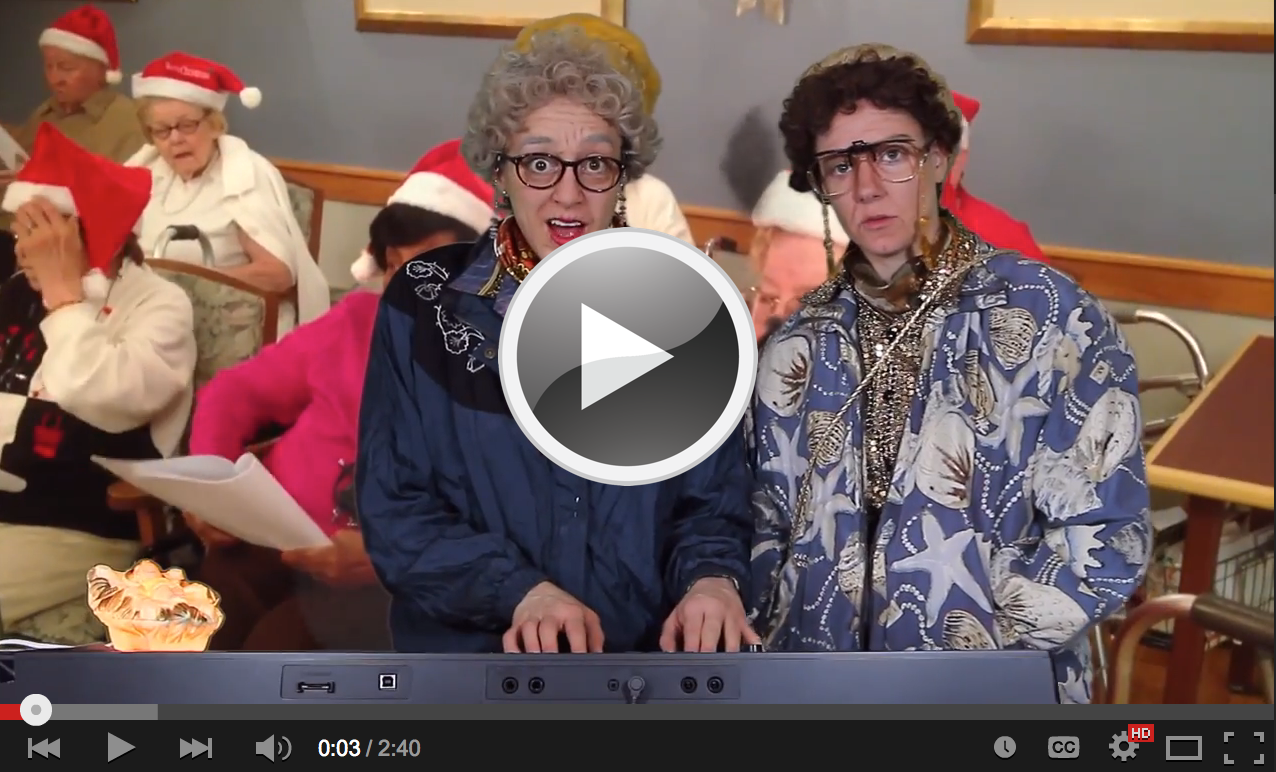 Watch us sing it and you can just shout what you want at your computer
screen. You can also take a look at the Holiday Shopping Guide video
that we made for the Lower East Side Business Improvement District.
But don't you go getting us anything. All we want for Christmas is to
spend time with you. 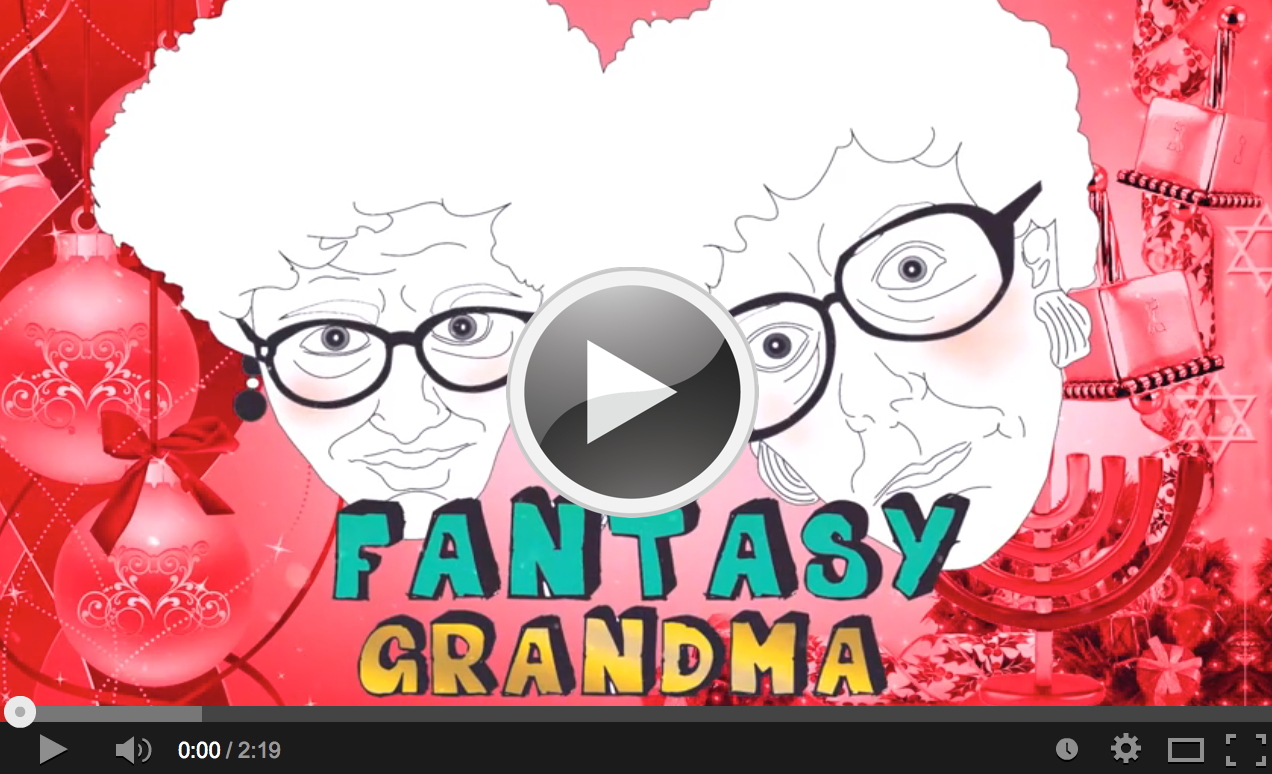 ​
​If you really want to do something nice for us, you could like our
Facial Book, follow us on the Pooter, the Instagramma and subscribe
to our Yourtube Channel. We won't be doing any more live shows until
January, and those seem to be the best ways to keep in touch with you
in the age of the internet.

Enjoy the holidays and know that you have a room here with us at the
Silent View Home for the Elderly as long as the paperwork goes through.

Holiday Shopping on the Lower East Side

Dear Grandbabies,
We made a video with the Lower East Side Business Improvement District for the Holidays, because we're on a fixed income and have to do commercials to get by. Let this be both a lesson to save early and often and a fun guide to your holiday shopping. You can watch the video here:

Myrtle J and Jane B
Your Fantasy Grandmas 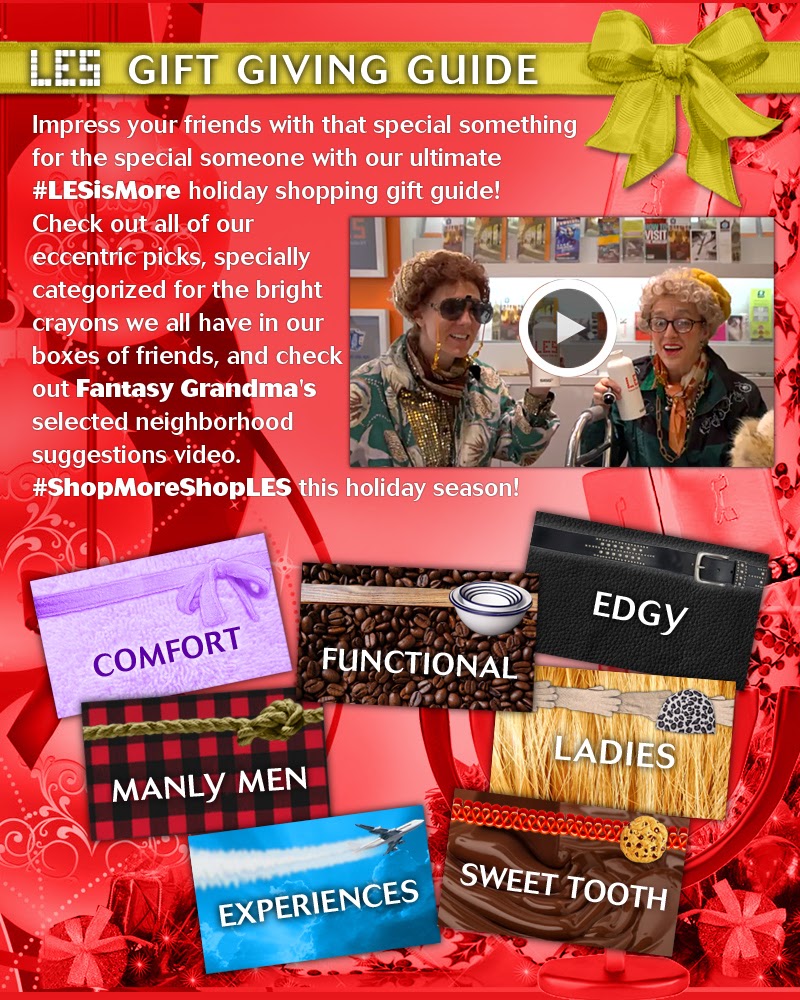 We have some shows coming up that we are very excited about, grandbabies.
THIS / THAT at the Brick:
https://www.facebook.com/events/1516849295220729/
October 17th at 10pm.
Lower East Side's Pickle Day: http://pickleday.nyc
October 19th. We'll be performing songs from 2-2:30pm, then hosting Cat Bingo until 3:15. The prize is a cat.
The New York Comedy Festival! HERsterical: http://www.carolines.com/comedian/hersterical-one-big-fabulous-comedy-party/
November 4th at 7:30pm.

Look here! Your Fantasy Grandmas are getting into a Pickle!


Pickle Day is coming up on October 19th! We haven't been this proud to represent produce since Myrtle J was named Mulberry Queen her junior year in high school. There was a senior girl, Mabel Wilson, who was bustier and had more money, but Myrtle was very virtuous back then and had a genuine love for Mulberries.

We hope to see you on Pickle Day, October 19th on the Lower East Side. They're blocking off the streets down there so Jane can maneuver her way onto the stage. 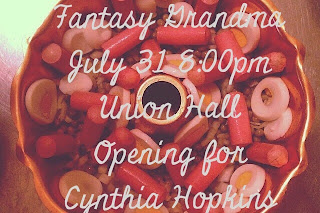 Exciting News that we pray will entice you to visit us

We've got the best news we've had for you since your Aunt Mater got through her knee replacement surgery without a hitch...

We have a gig coming up at Union Hall on July 31st. We'll be opening up for our grandbaby, Cynthia Hopkins. She's a very talented and beautiful songwriter, musician and actress and she always remembers to send us a card at Christmastime which you know we really appreciate.

We also have some new videos up on our Your Tube channel from our Vegas Style Bingo night with Valiant Pictures.

Here's one about apples and men:

But we'd love for you to watch all of them and to subscribe to our channel as well. The grandbabies keep saying we should go viral but we've explained over and over again that we both got our flu shots already for this season. No one ever listens to us.

We love you so much and believe in everything that you do and we are always praying for you. I put you on our church prayer train that you would get that promotion and also about Evelyn's fertility issues which I haven't told anyone about, I promise.

Your grandmas,
Myrtle J & Jane B

You know yesterday I was at lunch and Gladys was going on and on about the full moon coming up. How everyone needed to protect themselves and we should buy some flowers and drink out of a "shell" or something. She goes to a Unitarian Church, ya know.

And it got me thinking about how I feel on a full moon. I usually feel heartsick. I miss being close to someone I love in the bed, all snuggled up in what seems like a room with the all the lights left on.

(Which reminds me that you should always pay your electricity bill on time. Especially if you live in a warm climate.)

The moon would mean another month was gone.  I miss the way the passage of time used to feel. Like it was speeding by and I could feel it slipping through my fingers. There were so many happy moments, raising babies and loving my husband. I just wanted things to stay like that forever. Simple. Not easy, but simple.

(Which reminds me that while you're young you should always take care of your feet.)

Time moves so slowly now. I was layin' in my bed last night, for hours it seemed, in that special place that we all go to where we're not asleep yet but we're also not awake. I thought of you, grandbabies. And what you all might be doing and thinking and feeling. And how much hope you bring me. And joy. I remember when you were born how my heart filled with a beautiful bright light that I'd never known before. I realized then that you were the answer to the why we were all looking for. Me, your grandpa, your momma and daddy. You blew us away with your bright light. As big as the moon.

I'm going on now and it's getting late again. And I know I don't always make sense.

(Which reminds me that you really should start a savings account with that check I sent you. I saw today that you haven't cashed it.)

I love you. I hope you'll visit this Sunday. It sure would be good to hug your neck.

P.S. I hope you got over that cold, honey. 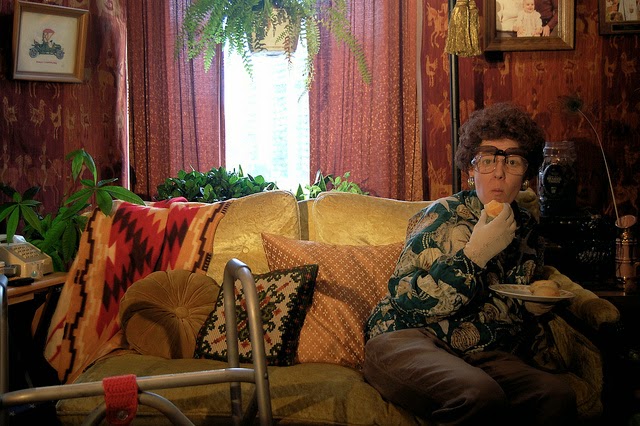 We're doing a show hosted by a puppet in the back of a bowling alley tonight. Please come. We love you. 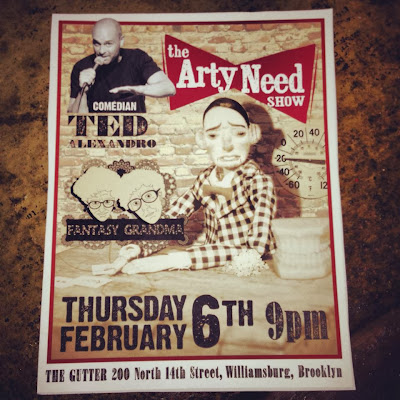 In honor of our gig in Philadelphia, PA next week, where we'll be matching up our young, flexible grandbaby artists to perform together live, without any previous rehearsal at all, we wanted to tell you about the time Myrtle J and Jane B met, which was the first ever performance of Fantasy Grandma.

It was another quiet day at the Silent View Home for the Elderly in Tucson, Arizona. Myrtle had accidentally traded her carrot cake for applesauce by falling asleep when Mr. Hofsted was near her table. She had been letting him get familiar and watch Wheel of Fortune in the her doorway since he didn't have a television. That was a fault of her own, but to her credit, the man was a cake thief. We all knew it. Bless his departed soul.

As it so happened, I had endured an accidental substitution that day as well. The nurse, Helen, who would be fired two years later for a similar but more serious infraction, had switched out my blood pressure medications with Dorothy Moore's anti-anxiety pills. This resulted in Dorothy having to see a specialist and me being as hopped up as a lit firecracker in a gumbo truck. I took to the keyboard to relieve some of the tension, as I always did on Sundays for church meeting and whenever I needed to cure my loneliness.

After I managed to call one of the aides over to plug the dern thing in, I began to play one of my favorite hymns, "Up From the Grave He Arose", but grand babies, something was very, very wrong. Gone were the familiar chords in all their rigorous Protestant pacing. My fingers were flying all over the place, like a drunk cardinal, and as I tried to sing, the words were coming so fast from my mouth they sounded like Latin.

It was at that moment that I knew I was a Catholic. And I have been ever since.

And that is just that. I love you too. Goodnight. What?

Alright. I'm sorry, I was supposed to be telling you about the first time Fantasy Grandma played music together. Myrtle, don't hit me.

Myrtle had just woken up to a bowl of apple sauce, and was in a pensive mood anyway because her financial situation was, quite frankly, desperate, and she had been informed she would soon have to share a room with Arlene, who has wild eyes and spitting night terrors. So, in this irritable state, and with me banging along on the keyboard some crazy new religion, she marched right over and tried to switch the keyboard off.

Of course, Myrtle has never been very good with technology, and when she started mashing her old rheumatic fingers all over the buttons, she made a hip hop beat come out. One of the preset ones that came with the keyboard.

And suddenly, it all came together, the rapid jabbering, the Catholic key ticklin', and "Up From the Grave He Arose", as you kids say, got gangster. I was making raps. And soon, Myrtle was too.

After that, Myrtle and I were best friends. We learned about the Wu Tang clan and Old Dirty Bastard and Tupac Shakur. We watched MTV and learned about Teen Moms, which wasn't such a big deal in our day, I'll tell you that.

We got down to Digital Underground and Lil Wayne and, to get to the Happily Ever After, Myrtle moved into my deluxe suite, because my ex-husband was a bastard if he wasn't a rich one, and I had too much space anyway. We've been best lesbians ever since and your Fantasy Grandmas. And I'm still Catholic.

So if your Grandmas can do it, so can you. Throw caution to the wind and let a new friend blow you over. If you know what I mean.

We love you. Hope you can make it to Philly to see us next Thursday. It would be a shame to miss you when you're this close by.

We'll be at the Christ Church Neighborhood House at 8pm. Earlier for drinks.