Lets build an app that uses several data-types in order to see how is stored from a low level perspective.

Even such a basic program links several libraries and occupy 2,568Kb,  it's really not using the imports and expots the runtime functions even the main. Even a simple string operation needs 544 functions on rust:

If you expected see a clear main function I regret to say that rust doesn't seem a real low-level language In spite of having a full control of the memory.

Ghidra turns crazy when tries to do the recursive parsing of the rust code, and finally we have the libc _start function, the endless loop after main is the way Ghidra decompiles the HLT instruction.

If we jump to main, we see a function call, the first parameter is rust_main as I named it below:

If we search "hello world" on the Defined Strings sections, matches at the end of a large string

After doing "clear code bytes" we can see the string and the reference: 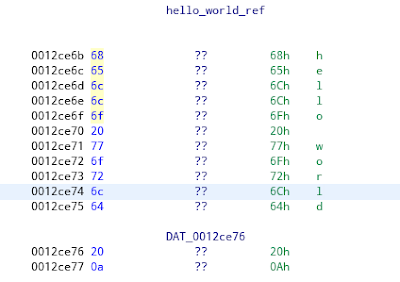 We can see that the literal is stored in an non null terminated string, or most likely an array of bytes. we have a bunch of byte arrays and pointed from the code to the beginning.
Let's follow the ref.  [ctrl]+[shift]+[f] and we got the references that points to the rust main function.

After several naming thanks to the Ghidra comments that identify the rust runtime functions, the rust main looks more understandable.
See below the ref to "hello world" that is passed to the string allocated hard-coding the size, because is non-null terminated string and there is no way to size this, this also helps to the rust performance, and avoid the c/c++ problems when you forgot the write the null byte for example miscalculating the size on a memcpy. 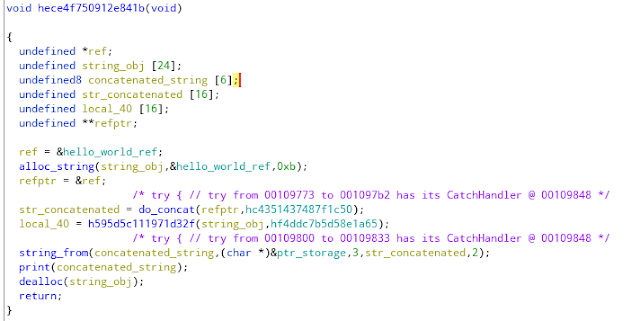 
Well I'm not gonna talk about the performance impact on stack but really to program well reusing code grants the maintainability and its good, and I'm sure that the rust developed had measured that and don't compensate to hardcode directly every constructor.

At this point we have two options, check the rust source code, or try to figure out the string object in dynamic with gdb.

Let's explain this group of substructures having rust source code in the hand.
The string object is defined at string.rs and it's simply an u8 type vector.

And the definition of vector can be found at vec.rs  and is composed by a raw vector an the len which is the usize datatype.

The RawVector is a struct that helds the pointer to the null terminated string stored on an Unique object, and also contains the allocation pointer, here raw_vec.rs definition.

The cap field is the capacity of the allocation and a is the allocator:

Finally the Unique object structure contains a pointer to the null terminated string, and also a one byte marker core::marker::PhantomData

The first parameter of the constructor is the interesting one, and in x64 arch is on RDI register, the extrange sequence RDI,RSI,RDX,RCX it sounds like ACDC with a bit of imagination (di-si-d-c)

So the RDI parámeter is the pointer to the string object:

So RDI contains the stack address pointer that points the the heap address 0x5578f030.
Remember to disable ASLR to correlate the addresses with Ghidra, there is also a plugin to do the synchronization.

Having symbols we can do:
p mystring

and we get the following structure:

If the binary was compiled with symbols we can walk the substructures in this way:

If we try to get the pointer of each substructure we would find out that the the pointer is the same:

If we look at this pointer, we have two dwords that are the pointer to the null terminated string, and also 0xb which is the size, this structure is a vector.

This seems the c++ string but, let's look a bit deeper: